In March of 1999, a 24 year old boy from South Georgia went to New York City to find an internship to turn the dream of moving to New York after graduating with a degree in Interior Design from  Georgia Southern University into a reality. Three interviews were scheduled at the D & D Building showrooms Grey Watkins, Hinson & Company, and Donghia.

Internships were offered by Donghia and Hinson & Company. One paid, one unpaid. Momma had told her son that he must secure a paid internship. Anxious, that boy went back to his hotel room after the interviews and called his Mom. And said these words,

The best advice my (yes, I was that boy) Mom ever gave me went something like this:

"Well, son, I don't know what to tell you except you are going to have to call Mr. Hinson and tell him that you have to have a paid internship and you really want to work at Hinson, it feels right and all that, and it's what you want, but your Mom told you that you have to be paid."

Oh my goodness. Was she serious? Did I really have to call Mr. Hinson and tell him that? YES, I did and it worked!

And in May of 1999, a U Haul truck arrived in NYC (driven all the way from Statesboro, GA, to New York City!) and in that truck were Mom, Scott Durden, and me. And in Scott and I moved to a FIFTH floor walk-up (that means no elevator -nothing but stairs to the 5th floor!) all of our worldly belongings while Mom stayed downstairs to keep anyone from stealing anything and to make sure the truck didn't get a parking ticket.

And a few days later, I became an intern in the New York flagship showroom of Hinson & Company, the renowned wallpaper and fabric company. And it was great, I loved it. And only a few weeks later, I was hired full-time and I worked there for seven months before deciding that I majored in Interior Design and I should work for a residential design firm. And I worked for two design firms over the next three years

And in 2003, I was back at Hinson & Company, first as a part-time sales associate in the showroom while I executed design projects for Jeffery McCullough Interior Design the rest of the time and then as Showroom Manager for a couple of years.

All in all, I spent half of my New York full-time living years as an employee of Hinson & Company. And I loved it. I really, really loved it. I only left in 2006 because Tim and I decided not to live in New York full-time and began splitting our time between New York and Louisiana. If that had not happened, I would not have left my position at Hinson & Company. And I regretted it for several years. Until there was no longer a Hinson & Company showroom. Until I would, most likely, not have had a job any longer because the company was acquired by Brunschwig & Fils.

A relationship that continued when I would make it a point to see him on my trips to New York, including lunch earlier this year. And email correspondence that covered so many topics (mainly, my inquiring about a particular person or product from the past and needing his encyclopedic knowledge of design history) and was quite regular.

On Friday, I received the news that Mr. Hinson had died. I had planned to email Mr Hinson this weekend to let him know that we are coming to New York in October and I would love to have lunch with him and Tripp, his partner. I so looked forward to another visit with the two of them. There is so much that I want to ask Mr. Hinson, so much I still need to discuss with him. So much gratitude for him that I need to express.

But I can't do that now. But what I can do is remember and honor the design industry genius that he was. And do whatever I can to make sure that the company, the products, the man are not forgotten for as long as I can. And hope that others will do the same and there will be great features of Hinson designs for years and years to come in all of the major design world publications.

So what will Hinson & Company and Harry Hinson be remembered for?

It could be fabric. Solids, textures, geometric patterns, prints were all wildly successful. The fabrics of Hinson & Company deserve their own feature and will get one next week.

I have a feeling that if Mr. Hinson's wish comes true, wallpaper is what Hinson & Company will be remembered for.

The photo above is from a 1996 article about Mr. Hinson and in that article, about wallpaper, he says:

"It is what I love best in all the world. You'll notice we're called a wallpaper and fabrics firm, rather than 'fabrics and wallpaper' like the other houses. And half of our sales are in wallpaper, a ratio that's at least double the norm. It's no trade secret that the heart of this company is my boundless, insatiable fascination with wallpaper."

There are so many Hinson wallpapers that I could feature and some I will in future posts.

In the mid-2000's, I would have said "Madagascar Cloth", the grass cloth on the walls in the above photo of Mr, Hinson, was the one pattern for which everyone would remember Hinson & Company but too many companies have ripped that off and are producing it now.
Will it be the "Spatter" pattern introduced in the early 1970's and called an "American Icon" design by House Beautiful magazine?

Eddie Ross used "Spatter" in Blue in the Bloomingdale's window he designed... 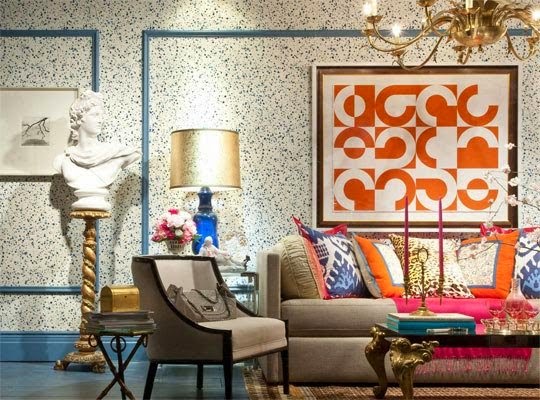 ....and Tom Scheerer used the pattern in the brown color way in an East Hampton bathroom: 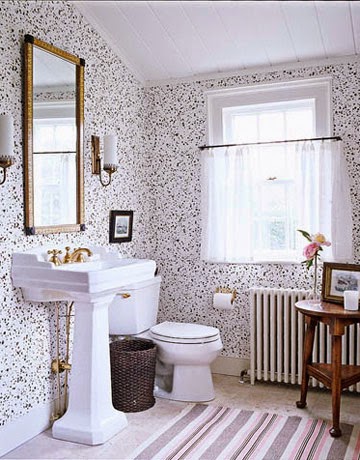 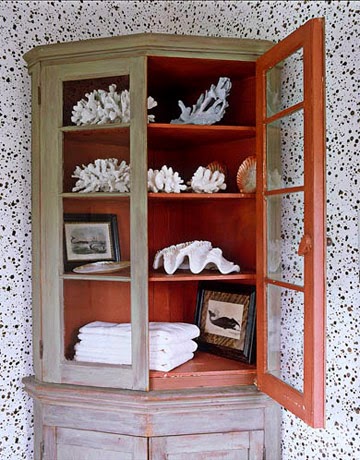 image via House Beautiful
Or will it be "Martinique", famous for its use at The Beverly Hills Hotel in Los Angeles and Indochine Restaurant in New York? 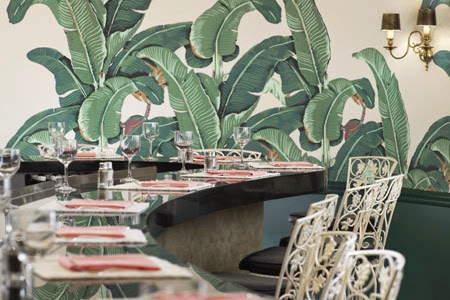 While I was at Hinson & Company, the fantastic Albert Hadley/Harry Hinson collaboration collection was introduced and was a major hit, particularly the "Fireworks" pattern. So maybe this is the one? 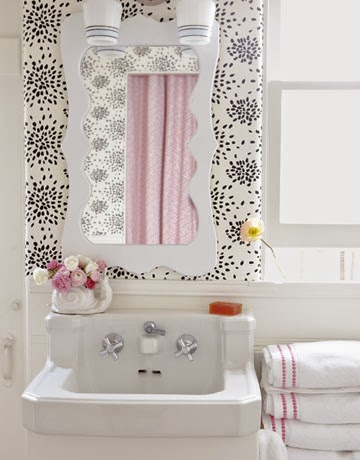 California bathroom with "Fireworks" Hinson paper on the walls 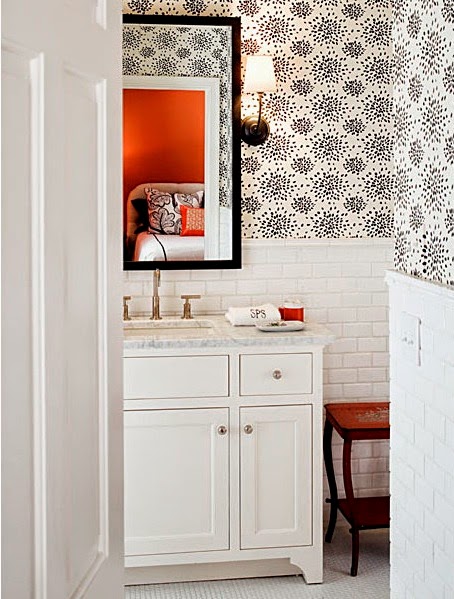 But it could be the Hinson/Hansen Swing Arm Lamp that goes down in history as an iconic Hinson & Company product.

Designed by George Hansen in the 1950's and becoming a Hinson staple when Hinson & Company bought Hansen Lighting, these fixtures have lit many a chic room. 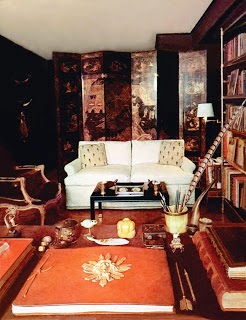 in a Billy Baldwin design room 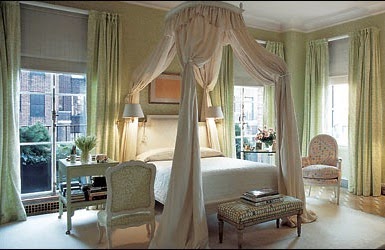 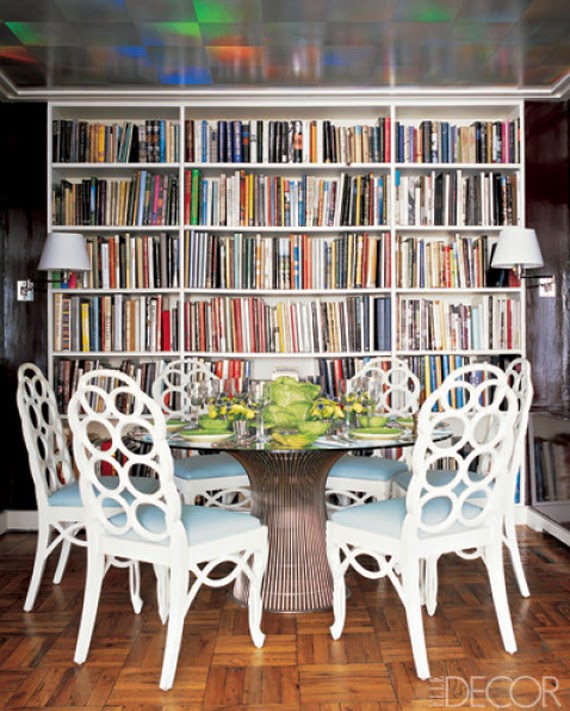 in one of my favorite dining rooms/libraries. designed by James Andrew. image via Elle Decor. 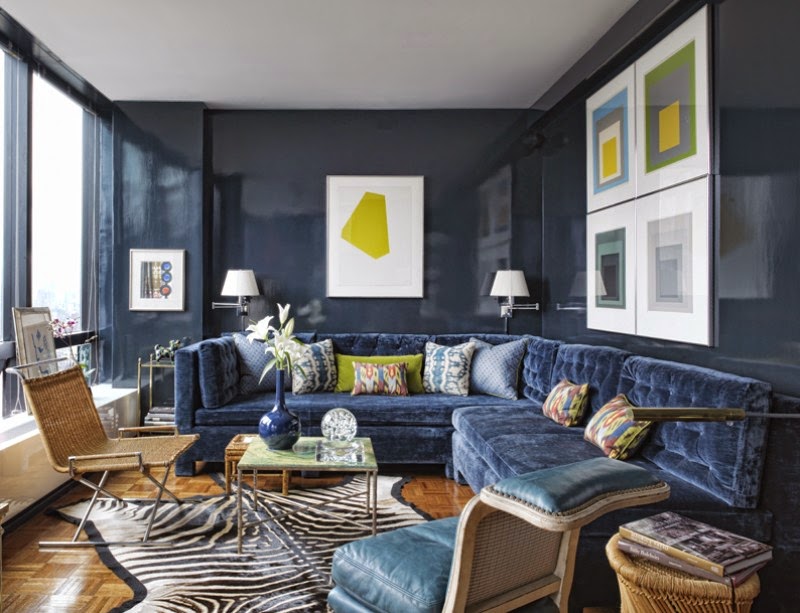 Or is it coffee tables from Mrs MacDougall, the furniture and accessories division of Hinson, expertly run by Tripp March and Toully Pappas for many years that one will think of as the seminal Hinson piece?

Whether an Atelier Midavaine lacquer table...


There are so many options that one could say will be the stand the test of time Hinson product and time will tell what that is.

No matter what anyone remembers about Hinson & Company, I hope the man, Harry Lee Hinson, as Southern as they come, will be remembered and considered a legend, an icon of the design industry for all of time. All accolades are well deserved. May time not wash away the history that is so important, and special, is my prayer.


Posted by Jeffery McCullough at 9:14 AM

There are so many memories of Mr Hinson, as we called him in his showroom in NY.
He taught me how to run a showroom and how to be attentive to small details that made his reputation: from folding memo samples into a silk paper tissue and close it with a sticker embossed with the letters HH, making sure there were no wrinkles on fabrics hung in the showroom, leaving the desk spotless and clean of papers at the end of the day, or even not having any drink on the desk and so much more....
He will be missed.

I have indeed many found memories of Harry during these few years working for him.

A true gentleman as we don't find them anymore in NY.

Isabelle: I am so glad you came across my post. YES, many fond memories. I would love to use your comment in the 2nd part of my remembrance of Mr Hinson. May I? Congratulations on the wedding! Email me so I have your new email address. jefferymccullough@hotmail.com
JM

Jeffery, You can use my comments anytime. I sent you an email.
I hope to see you soon in NY.

Jeffrey, thank you for this. I am a cousin of "Harry Lee" as we call him. We all were amazed with his accomplishments over the years. Many of us were able to visit the showroom and see the wallpaper he named for many of my family members (my mother, Julia Brooks, had many of his fabrics in her home she built in the early 80's....a great source of pride (especially the one named "Brooks")

It's comforting to know that he left a legacy for you and others. We think of Tripp now and move forward with the distinguished memories Harry Lee impressed upon us all.

Jeffrey,
Lovely story...I have many memories too.
All the best.
Oskar

I worked for Mr. Hinson in the mid-to-late 70's and I would not trade the lessons I learned there for anything.

Hi Jeffrey
Soo glad I came across this after losing an order with Donghia closing. Such a great time of design in the roaring 80's Hinson was soo chic and really set a design direction. Best, Chris Coleman