"Nature is always the artist's best source of inspiration, but in its spiritual, not physical sense. In nature every object exists in relationship to other things. This is what we must seek."

So said Hans Hofmann. This quote appeared in Cynthia Huntington's book The Salt House about the relationship between humans and nature while living in the unelectrified, pumped water only Dune Shacks of the Outer Cape's Province Lands in Provincetown. When I read the quote, I knew that one of my favorite Provincetown artists, Laurence Young, was being described. 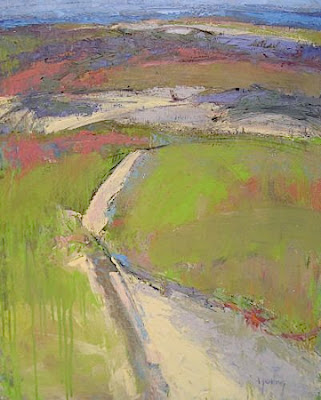 Outer Cape
Oil/Wax on Canvas
24" x 30"
$ 2,800.00
from Powers Gallery, Acton, Massachusetts
Laurence Young is an artist whose work is perfect because each piece achieves exactly what Hans Hofmann is referring to--the delicate balance of representing the object as well as that which surrounds it. Whether the subject is a dune, boat, building, or figure, a balance of color, strength, and depth in Laurence Young's paintings keeps the spiritual and physical relationship in check. Boat, dune, and cottage painters are a dime a dozen on Cape Cod but Laurence Young is set apart from all of the rest by his ability to paint more than just a dune, more than just a boat. The viewer can't help but want to get in the painting-to touch the boat, walk the dune, knock on the door of the house-and live in the scene. 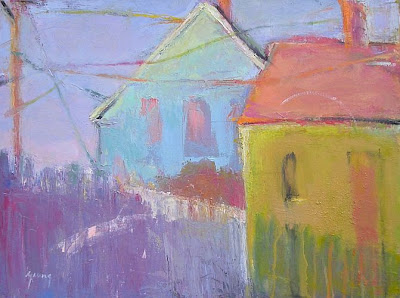 Our Wires Crossed
Oil/Wax on Canvas
18" x 24"
$ 2,000.00
Somewhere just between representational and abstract is, according to Young, "a hard place to be. I try to give enough information for the viewer to know it is a particular place or object. But also allow the viewer to investigate the painting and find something interesting and come back to it again and again and find something different." Isn't this exactly like nature? We can visit the same spot over and over but whether we are there in the morning and then again in the afternoon, even on the same day, there will be something new, fresh, exciting. The tide and light will change, therefore the physical and spiritual relationship between the subject and the environment changes. 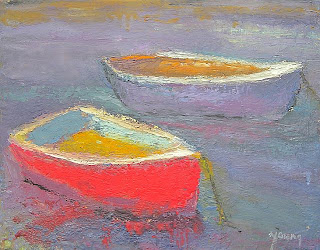 Red, White and Blue
Oil/Wax on Panel
14" x 11"
$ 900.00
New, fresh, exciting. This is exactly what drew me to the paintings of Laurence Young when I first saw them at Alden Gallery in Provincetown last Summer. I was with Tim and our dear friend Lue Svendson, the artist and gallerist, at a Friday night Art Walk opening which happened to feature Laurence's paintings. Lue and I fell in love immediately with the work being shown. And then we met the man who created these new, fresh, exciting pieces. What a wonderful soul Laurence Young is. This meeting began a great relationship between Laurence and Lue as Lue's Rue du Pont Galerie in Breaux Bridge, LA, became the second (Elder Gallery in Charlotte was the first) Southern gallery to represent the artist and through both Alden and Rue Du I was able to begin selecting work for client projects. In the last year I have placed four pieces in client projects including this piece purchased at Rue du Pont and now hanging in a Lafayette client's living room:

A life long artist who studied printmaking in college and had a career in the fashion industry in New York, this man's journey from part-time to full-time painter is much like his painting Seasonal Change, ever changing and ever growing. From Boston, to New York, to New Hampshire, and finally Provincetown, the oldest continuous art colony in America, Laurence has experimented with technique and style-he began with oil pastel drawings of scenes of people on the streets of the Upper West Side in New York-studied with various masters including Wolf Kahn, Cynthia Packard (Laurence credits a workshop with Cynthia as changing the course of his work), and Lois Griffel (of Cape Cod School of Art), and whenever he could immersed himself in the work of Milton Avery, Josef Albers, and Egon Schiele.
Wolf Kahn and Cynthia Packard are two of my favorite living artists and I am always blown away by any Milton Avery or Josef Albers that I see so once hearing from Laurence that these are the artists he is inspired by and admires, it became perfectly clear why I respond to his paintings. He admires "Albers as a colorist, Avery for his simplicity of form and color in both landscapes and figures, and is moved to tears by Schiele's figurative work", and is able to be inspired by these greats and incorporate elements observed in their work into his paintings while remaining true to himself as an artist. 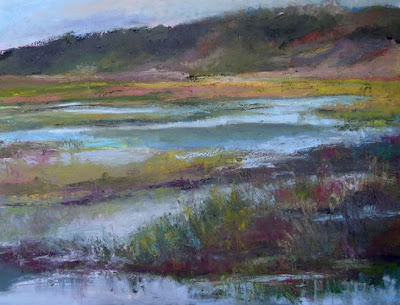 Seasonal Change
Oil/Wax on Linen
30" x 40"
$ 4,000.00
currently on view at The Red Inn in Provinctown
from Alden Gallery, Provincetown, Massachusetts
Last month, I was able to visit Laurence Young's home studio, attend an opening at Alden Gallery which included new work by Young, and spend an hour on the beach with Laurence getting to know him and learning about who he is as an artist and what makes his paintings so special. As a designer and consultant, I think it is important to know an artist. As a collector, I think it is really important to like an artist. This artist is very easy to like. Warm, introspective, and real are qualities that immediately come to mind. There is something about this native Bostonian and life-long resident of the Northeast that feels Southern. Southern with a slight edginess that adds depth and texture to the character. 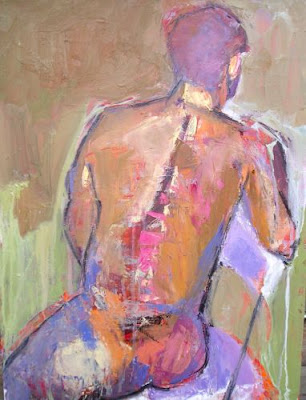 Back Stitch
Oil/Wax on Canvas
24" x 28"
$ 2,000.00
An edginess and character like New Orleans, the city that Laurence Young longs to call his winter home to escape the bitterness of February on Cape Cod. "New Orleans reminds me of Provincetown in the early 70s. The Marigny neighborhood has an interesting underbelly, is very real, and is gritty and edgy and full of life. There is a community of artists and access to the arts like Provincetown used to have." With the success achieved at Elder Gallery in Charlotte and Rue du Pont Gallerie in Breaux Bridge, only two hours from New Orleans, and potential gallery representation in other parts of the South, it seems Laurence might have a reason to spend part of the year down South. The artist would certainly be a wonderful addition to the burgeoning art scene of New Orleans. 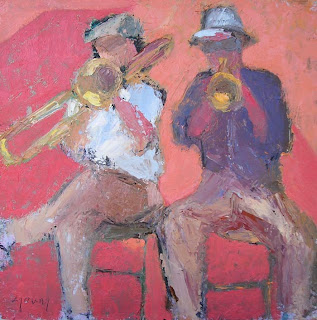 All that Jazz, New Orleans 2010
Oil/Wax on Panel
12" x 12"
$ 850.00
from Rue du Pont Galerie, Breaux Bridge, Louisiana
So what is next for this exceptional artist? Laurence will be included in a show at The Painting Center in New York that opens in late November. This show is curated by Patrick Webb who sees Laurence Young's figurative work as emotionally evocative and the landscapes as expansive, outward, illuminating with a calming and meditative feeling about them.
In addition, the artist would love to be in shows in Quebec and Santa Fe and hopes to spend part of the winter in New Orleans when he comes to Louisiana for an opening at Rue du Pont Galerie. 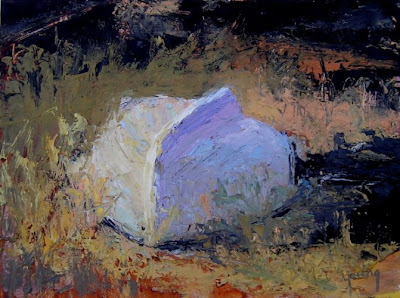 Nut Shell
Oil/Wax on Panel
9" x 12"
$ 560.00
from Rue du Pont Galerie, Breaux Bridge, Louisiana
The boats. I keep coming back to them. For this is what first drew me in and made me a fan of Laurence Young's paintings. I have a feeling that wherever he is, there will be boats on the horizon that will beckon to be painted by Laurence Young. We, the viewers, will want to go along for the ride! 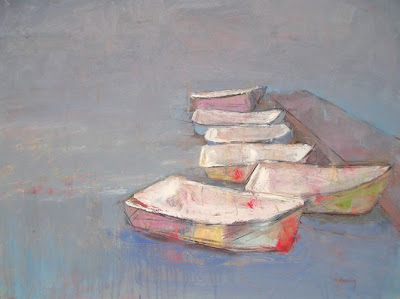 A String of Pearls
SOLD 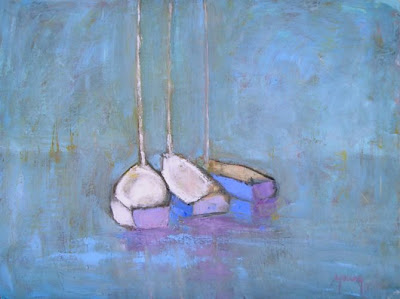 Posted by Jeffery McCullough at 11:12 AM 2 comments:

My love affair with a house continues. We leave Provincetown on Sunday so I only have three more days to "visit" this perfect beach abode. I was able to see the property from the beach and the dream still lives, possibly even stronger now that I had the opportunity to stand at the bottom of the steps in bare feet with the sand between my toes imagining walking through the garden into the house of my dreams.
Here is the property from the beach. The main house is on the right and the guest cottage on the left with a lovely garden between. 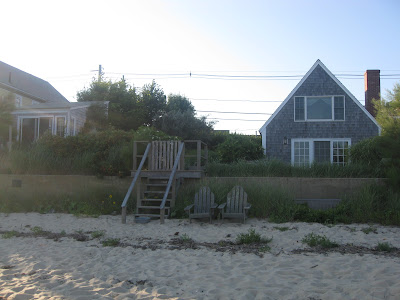 I imagine the guest cottage as the perfect separate space for friends and family that visit but also a quiet spot to read and meditate. With three large walls to fill with art, I have selected these pieces to continue the collection in the main house. These are pieces by two of my favorite Louisiana artists and seven excellent Cape Cod artists.
Above the bed and the starting point of the guest house collection, a diptych by Mallory Page: 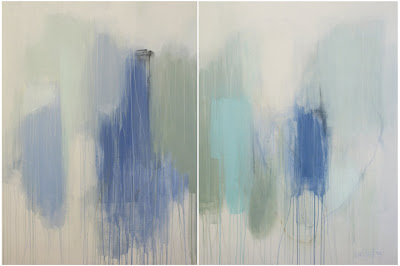 Mallory Page
Need & Want Diptych
Acrylic on Wood
3' x 4' each
$ 4,725.00/pair
available from Max & Company, Atlanta, Georgia
One large wall will have a grouping of: 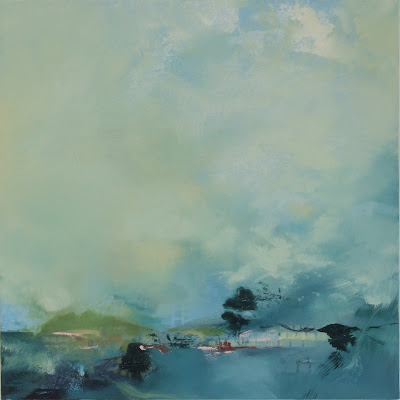 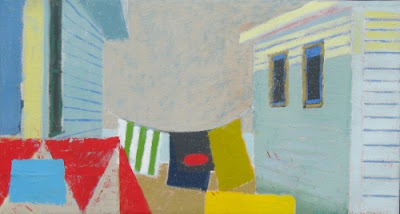 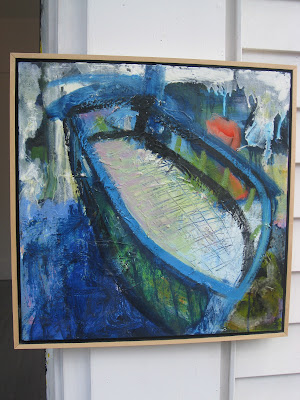 and the other large wall: 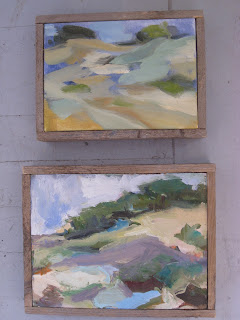 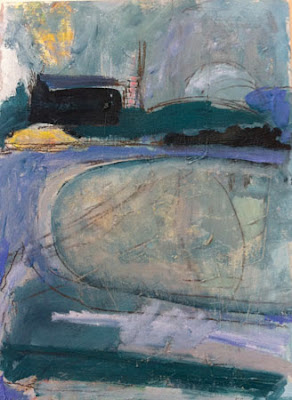 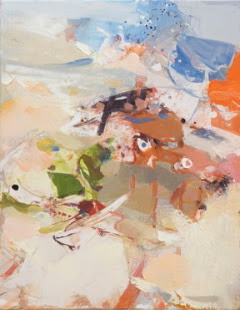 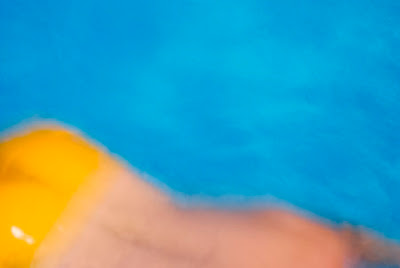 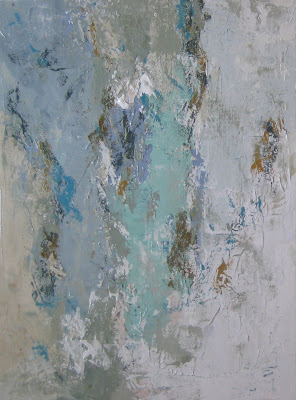 Hope Hebert
Sea Breeze I
Acrylic on Canvas
24" x 18"
$ 600.00
from Gallery at City Club at River Ranch, Lafayette, Louisiana
and also for the bathroom I have selected three charming Cyanotypes by Rebecca Bruyn from Cortile Gallery in Provincetown: 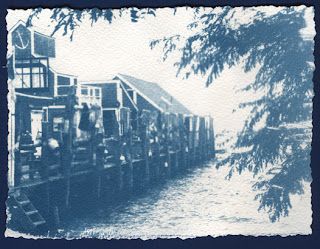 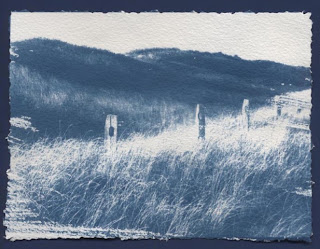 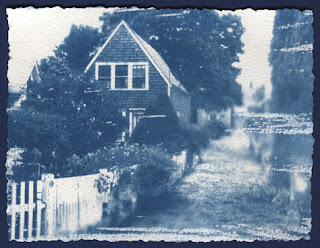 Rebecca Bruyn
A Summer Path
Cyanotype
5" x 7"
$ 450.00
OK. I think I can now accept that Tim and I are not going to own this unique property in Provincetown.  By the way, the asking price is 1.695 million. That helps let the delusion go!
As I have gone to all of the excellent galleries on the Cape and seen really fantastic pieces of art, I have assembled the dream collection that I would love to have. The pieces I chose are all available for any of you to add to your collection and I hope you will consider some of these pieces.
As I go into my final weekend in Provincetown, I will dream of future visits, get some sand between my toes, sun on my face, and look for boats on the horizon. I hope you are able to do the same wherever you are.
Peace,
Jeffery
RESOURCES:
Mallory Page    www.mallorypage.com
Mrs. Howard/Max & Company   www.phoebehoward.net
Joerg Dressler   www.joergdressler.com
Mitchell Johnson   www.mitchelljohnson.com
Munson Gallery    www.munsongallery.net
Liz Carney        www.lizcarney.com
Four Eleven Studio   www.fourelevenstudio.com
Karen Cappotto   www.karencappotto.com
Schoolhouse Gallery  www.schoolhouseprovincetown.com
Lora Brody     www.lorabrody.com
Hannah Bureau     www.hannahbureau.com
Julie Heller Gallery   www.juliehellergallery.com
Hope Hebert     www.hopehebert.com
Rebecca Bruyn    www.rebeccabruyn.com
Cortile Gallery    www.cortilegallery.com
Posted by Jeffery McCullough at 3:46 PM No comments: